I wasn't popular in high school. In a Catholic institution filled with all things blond, tan, ambitious, and religious, I was the weirdo agnostic who dug combat boots and barely saw the light of a grade higher than C. My sole friend—a conservative, prim Brainiac—never viewed me as a misfit, however. I was her dear pal. A sleepover buddy. I was the person who snuck into a vacant girls' locker room at lunch to philosophize life and Tolkien with her, without the background chatter of a blustering cafeteria.   Before we graduated, I made the risky choice to tell her that I was bisexual. I never had a crush on her, I said, but I wanted her to know the real me, whatever that was, before we journeyed our separate ways to college.    A week or two later, she sent me a lengthy hand-written letter, the old-fashioned way: through mail. It was one of the most beautiful, raw, and compassionate things I had ever read, filled with unconditional love and support. I was floored. In my head, I whispered continual gratitude—a thousand silent thank-yous to whoever listened to my internal ramblings that I had, despite my prediction, not lost a friend.   I tucked her letter in my bedroom drawer and vowed to the stars I would respond soon. But I never did. And I never saw or heard from her again.

in the wind
a thousand apologies
​lost forever 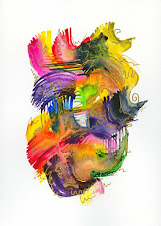 a question of balance | mixed media on paper

Tiffany Shaw-Diaz
Dayton, Ohio, United States
Tiffany Shaw-Diaz is an award-winning poet and visual artist who lives in Centerville, Ohio. She is the creator of the poetic form, Socratic verse. To view her art, please visit: www.tiffanyshawdiaz.com. 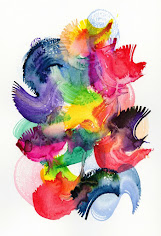 valley of daydreams | watercolor on paper